tldr; 3 of 5 stars. OK for early adopters in suburban environments with snowfall up to 8″ per batch

Don’t think of the iON8024 as a normal two-stage snow thrower. Think of it as a beefy single-stage snow thrower that you can make full-width passes over your driveway and sidewalks with. Note in the photo below how the width and height of the intake are very similar to a single-stage unit. The 2,500-watt motor is equivalent to ~3.4 horsepower in a gas model, so the gearing is set low so it doesn’t choke itself. Typical gas snow blowers range from 6-20 horses.

I have 250′ of driveway and sidewalk to plow and I’m able to clear it using two sets of 6.0ah batteries. I could probably do the 100′ driveway itself on one pair of batteries.

At the end of the day, I think the machine is capable enough for early adopters of electric tech in a modest suburban lot. It’s kind of crazy to say this is still for early adopters considering that Snow Joe first released their two-stage snow blower in 2011. The complete lack of competition meant that Snow Joe was able to rest on their laurels–and clearly they have. The machine is functional but still plagued by poor build quality and nonsensical user interfaces. If Ariens were to re-release their 1995 AMP with Lithium-Ion Batteries it would blow this machine out of the water on day one. But they haven’t so here we are.

The Black Sheep of the snow clearing industry

Everything about this Snow Joe is a bit different from everything else on the market today. Sometimes in a good way, sometimes not.

They don’t have a vast dealer network so they’ve essentially engineered this thing down in size and weight for mail-order service; You buy it online and it ships to you. If there are problems within the warranty period they just ship you a new one and you put the old one back in the box and ship it back. Any work out of warranty would also require round-trip shipping to their service center.

The size and use-cases of the iON8024 are also a bit different. The unit is slightly smaller than a typical gas-powered two-stage unit. There is a wide chasm between the needs of a suburban driveway with average snowfall and the youtube-commenting-haters from snow country. Don’t compare this machine (even with extra batteries) to a high-end gas machine–they’re not in the same category. If you live with lake-effect snow or ‘drifts’, nobody makes an electric snowblower for you yet.

So given that this is a bit of an outlier, and that even my early-adopter tendencies have limits, I did a lot of research ahead of time to get an idea of how this might play out. If you want a single video that gives you the full experience from box to berm, check out Random Razr’s video below. I’ll put more video links in the comments.

As a UX designer, of course, I have to tell my experience in the form of a user story which hopefully will help both you and Snow Joe. I’m a 6′ tall man who lives in the Northeast where we get a handful of snowfalls per year which rarely exceed 6-8″. I have a suburban driveway 100′ in length with a width of 2 cars and another 150′ of sidewalk to cover.

I take shipment of the unit and the packaging, as mentioned throughout the Internet, contains almost no padding whatsoever. They did manage to print some photos and text on the box but that is where the unboxing joy ends. Any shipping company that drops this, or ships it on the wrong side will inevitably bend some part of the metal frame and generate an instant warranty claim.

Once unpacked the assembly was quick…except that on the highest setting the handlebars are too short for me and I have to hunch slightly to operate the machine. Snow Joe support says that taller handles are not available.

Adjusting the clearance was easy enough. I stacked three quarters on the garage floor, set my snow blower’s scraper blade on that, and installed the skids.

The unit did not come with automotive grease but I bought some and applied it to the chute rotation gear to help prevent ice buildup and to reduce wear.

The batteries and charger reeked like a cheap toy from China. It took a few days for the off-gassing to finish and for my basement to smell normal again. The charger uses some strange and overly complicated system of hieroglyphics to explain battery status so I redesigned it:

Then I wait for snow. The first batch is gradually freezing rain followed by some real snow which settles down to ~ 2″ of heavy stuff. As you’d expect from electric, the process of getting going was a breeze: Drop the batteries in, turn the key and we’re off.

That’s about where the joy ends, though. The levers on the top of the unit are cheap plastic with very little throw and a very light, uninspiring ‘click’ when they engage.

At the end of each run, you’ll need to turn the chute which has been a problem for these models since they did away with the mechanical system. Mine came with this thumb switch on the left handlebar handle. It’s covered in a clear plastic which becomes stiff when cold. This stiffness makes it both hard to press as well as removes any kind of tactile feedback of the button being pressed.

The 2020 model moves the controls onto the main panel which just shifts the problem from one place to another. The panel’s weather cover is more flexible than the old button, but the panel buttons themselves are short-throw so you don’t get any haptic feedback when they are pressed. The padding in your gloves will require you to press extra hard to keep the button activated.

As you walk the impeller senses load and slows down if it’s spinning but not taking in snow. I find this to be more a statement on the shortcomings of our current state of battery technology than any kind of useful feature. Frankly, I loathe adaptive systems like this. This ‘feature’ also exists on my electric lawn mower as well as on new models of Dyson vacuum cleaners. The problems with these ‘smart’ systems are magnified when you switch from low-pile carpet and grass clippings to heavy snow. The operator of the machine is steering the device and anticipating the changes that lie ahead but the machine only reacts–and on a delay. The user sees the snow deepen but does not hear the machine rev up to attack it. The machine doesn’t detect the change until the snow scoop full of snow at which point even your high-torque electric motor is going to bog down! So you create cognitive dissonance followed by decreased performance or stalling. Win-win? 😛

So in light snow conditions, the machine will whir slowly while it scoops up a small pile of snow, then rev up to digest and spit it out. It works, but it’s disconcerting. If you have a healthy snowfall it will always be revving and acting as you’d expect.

As for the interface: it’s pretty user-hostile if you consider wearing gloves in the winter to be normal. See below photo: 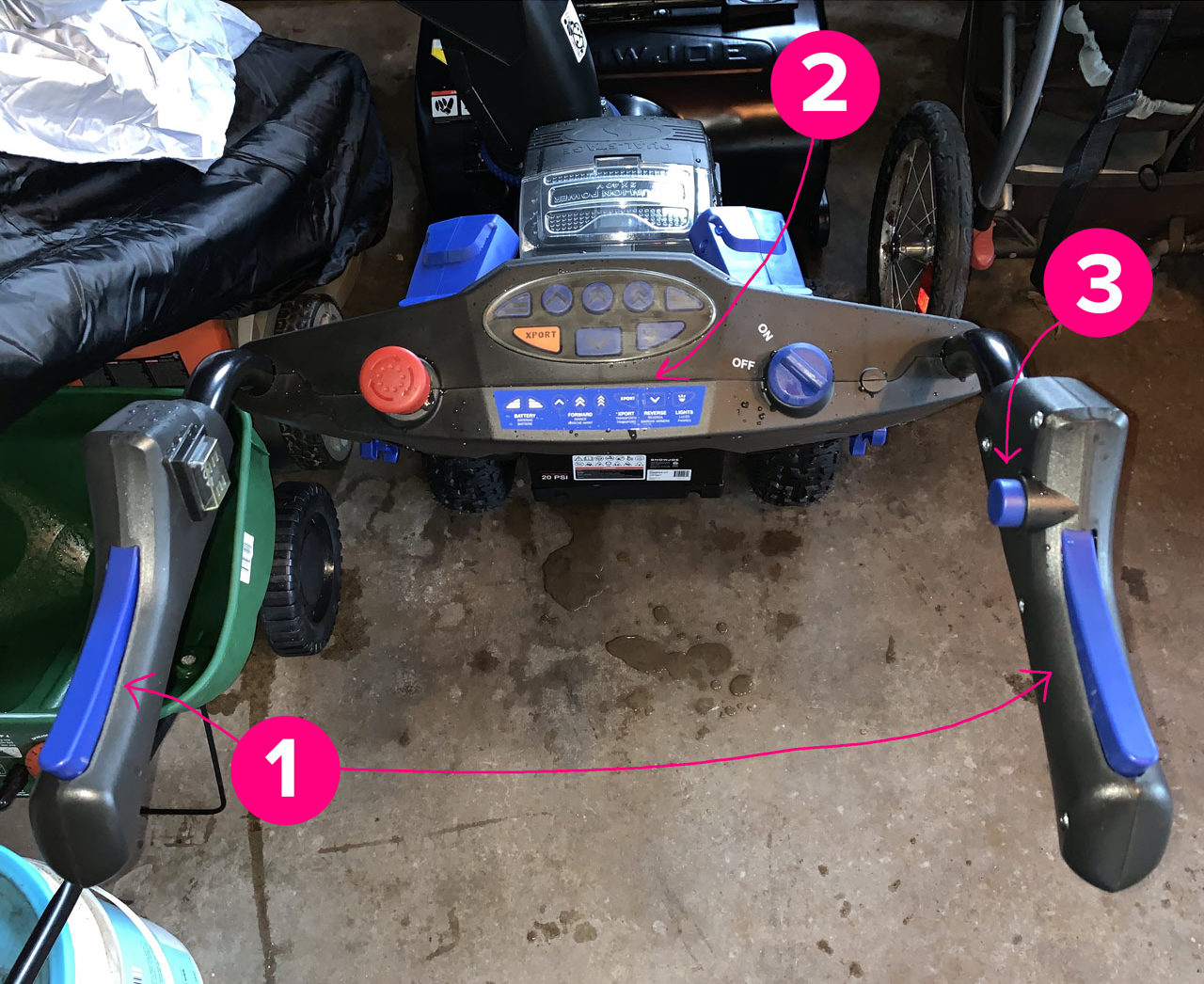 So of course I redesigned that as well. Below is a diagram of a few obvious solutions:

The low weight of the machine is nice, though. It’s easy to spin around at the end of a run. Unfortunately, the axle is locked so both tires spin together which creates some friction when turning, which will dramatically increase the wear on them. On the upside, this should improve traction when going in a straight line.

So from this experience, the impression I got was that Snow Joe/Sun Joe must be a company based in South America where the designers don’t exceed 5’4″ in height and they have no access to snow or refrigerated rooms for testing with gloves. Imagine my surprise when I discovered that the company is actually based in New Jersey!

If you’ve read this far you might be surprised to learn that I still prefer this to the headache of gas machines. That said, it really burns me up that there are still so many glaring problems so many years into the production of this machine. I’m not one to wish bad luck on anyone but on every site that has ratings for this product you see customers urging Snow Joe to fix these problems and honestly I think the only thing that will make a difference at this point is a nice solid slap to the face by some competition. Ariens? Honda? Husqvarna? Toro? Where are you guys?!?!

In my researching I found some folks who have tried to address the limitations of their snowblowers by modifying them. Here are a few that I felt were relevant to this review.

Edward on Amazon reviews highlighted the switch problems that I experienced. He oped to replace the OEM Snow Joe switch with a SAJOO 16A 125V/10A 250V ON/OFF/ON 6pin Boat Car Rocker Momentary Switch. I ordered this switch and would NOT recommend it. While the switch solves the problems of stiff weatherproofing and lack of user feedback, it does not return to the neutral position which means it would be easy for someone to engage the motor, let go of the switch and leave the motor fighting against the gear stopper and burn out.

Does it need new skids? No. Are Aftermarket skids better? Yes.

The OEM skids aren’t atypical for a snowblower–they are stubby and made of metal which is durable but at the cost of adding friction against the pavement. I picked up a pair of Arnold Universal Snow Thrower Slide Shoes which use a slippery, reversible polymer design and they work quite well on both pavement as well as gravel.

Does it need rubber flaps on the second stage?

I saw a lot of complaints online that this snowblower clogs up with slushy snow and wondered if that was valid so I did some research. As it turns out that is simply a design flaw of two-stage snow blowers in general. sixtyfiveford posted a video on how he modified an old gas snowblower to solve this very problem. It’s super intriguing to me but I haven’t gone down this road yet