Horizon: Zero Dawn on a Mac with gyro aiming: YES YOU CAN

DISCLAIMER: The procedures in this article require using tools that will change the partitioning on your hard drive as well as replace hardware drivers. This process is always risky so back up all data.

SUMMARY OF ARTICLE: You can run the PC version of Horizon Zero Dawn on Mac hardware with gyro aiming. It’s a wonderful game made playable thanks to the work of a handful of modders. I have tested and used everything described below on my 2018 Macbook Pro which has a Radeon 555X graphics card with 4GB of VRAM. The game runs smoothly on a single screen at 720p.

On August 7, 2020 the highly acclaimed Horizon Zero Dawn Complete Edition was ported from PS4 to PC. Like a lot of Mac/Nintendo households, I was looking for something to tide me over while I wait for Breath of the Wild 2 so I thought it would be worth seeing what was involved to run it on my Mac.

This is a rapidly evolving situation. None of this was possible until the most recent Horizon Zero Dawn 1.05 patch released on September 16 (it’s September 23 as of this writing) as well as custom graphics card drivers which are required to avoid critical bugs in the game.

Here is the full process I went through from beginning to end:

You’ll need to be able to boot your Mac directly into Windows to get full performance out of your system. You can follow this video here to set up Windows 10 via Bootcamp: https://www.youtube.com/watch?v=Hmm9Q-T0oTo&ab_channel=9to5Mac

Make sure to allocate enough space! Default space is 20GB for Windows 10 but you’ll need 70GB for Horizon Zero Dawn and another 20GB or so for extras and scratch disk space.

If you already had a boot camp partition and you don’t have enough space you can actually resize it using this tutorial: https://www.youtube.com/watch?v=-WRkeL1Lnq8&ab_channel=JohnShirley

Set up Steam and Get Horizon Zero Dawn

I suggest the Steam version only because you can add controller configs to the game within their system. https://store.steampowered.com/

Steam will automatically download updates if you let it so you should automatically get 1.05 which is the latest patch as of this writing.

As mentioned loudly and frequently on the internet, the initial port was a bug-ridden disaster requiring both patches to the game AND your graphics card drivers.

If you try to run the game out-of-the-box you’ll get a warning like this. If you proceed anyway you will experience frequent crashes. 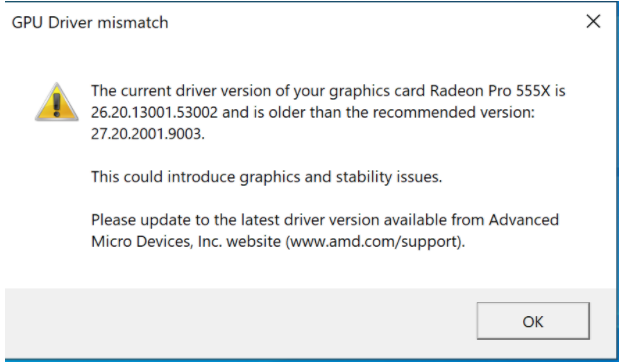 If you try to update the Radeon software using its own tools you’ll get this: 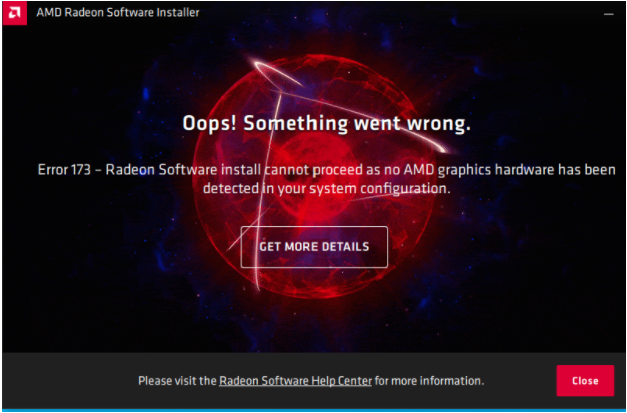 So you need to use a specially modified version of the Radeon drivers from https://www.bootcampdrivers.com

I opened this tutorial up on an iPad to carefully follow along https://www.youtube.com/watch?time_continue=990&v=pmBWGdIGke8&feature=emb_logo

My Macbook Pro Bootcamp install used Radeon Enterprise (Blue) edition so those are the drivers I went with to ensure compatibility.

This was covered in the bootcampdrivers.com tutorial above but here is the download link for the app. Setting your cooling to be more aggressive will help prevent performance problems due to overheating. https://crystalidea.com/macs-fan-control

Steam has built in support for a number of controllers including the Nintendo Switch Pro controller. Open Steam and:

The camera joystick is fine for looking around the world but it is a TERRIBLE interface for making fine adjustments when tracking moving objects.

AL2009man said it best when describing his first experience playing with the official Steam controller and I quote: “And my disappointment is immeasurable and my playtime is ruined.”

He created a mod which maps gyro movements to mouse controls so you can make small movements with the gamepad to aim when ZL is pressed. His mod was set up for PS4 and Steam controllers which you can use if you already own one of them. You can see his original work here: https://www.youtube.com/watch?v=GvEKYsnFsGw&t=145s&ab_channel=AL2009man.

Tannershelton3d/Alphabean11 extended this support to Nintendo Switch Pro controllers. The UX for retrieving the config is absolutely stupid and looks like this.

Since I’m not a Windows guy I had to discover this feature on my own but if you press Windows-P you can decide where to ‘present’ your screen. This is great for laptops because you can choose “External only” and your laptop screen will turn off and will only run on your external display or television. In my first full week in this is the only thing I like about Windows. 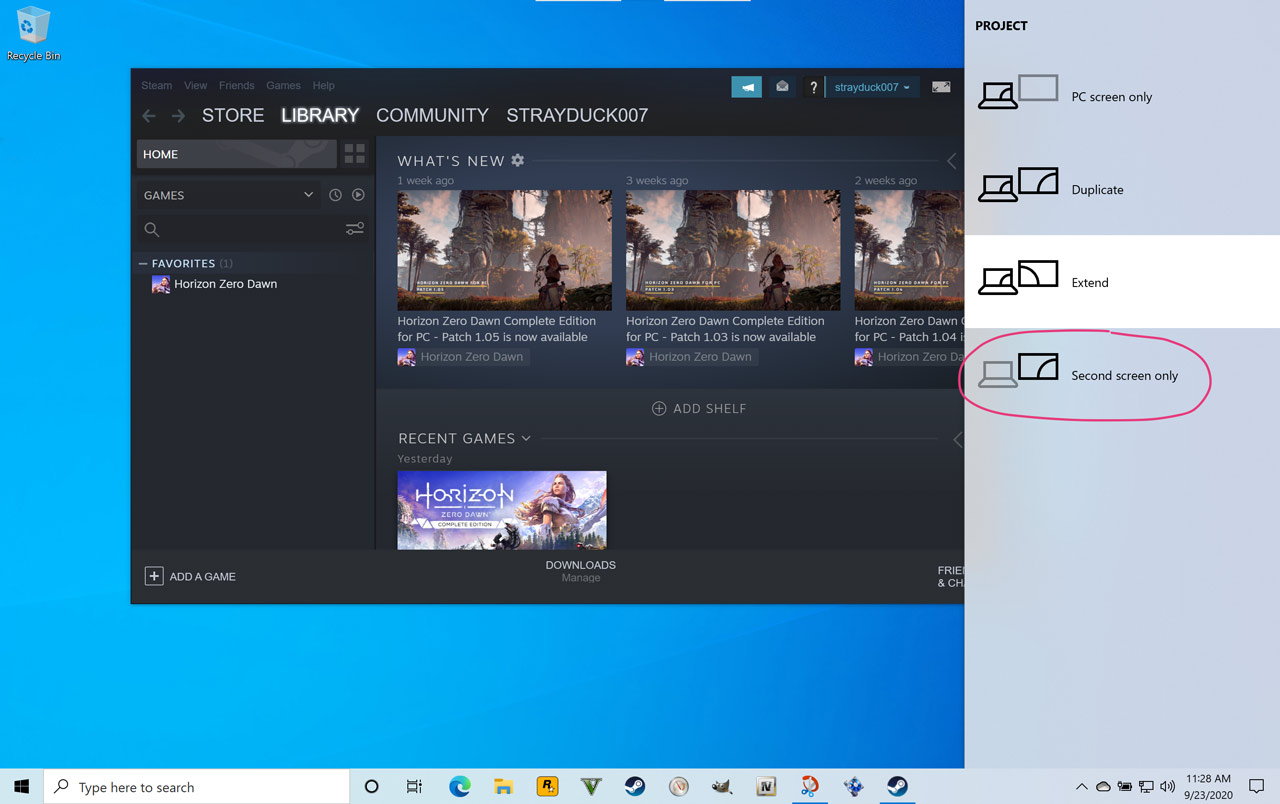 Coming from Mac/Nintendo where things generally “just work” this was a tremendously frustrating process. I’m not sure if all of these eccentricities, scattered documentation and compatibility problems are the typical experience for PC gaming but if so that is very unfortunate.

Gryo aiming isn’t quite as refined as on the Nintendo Switch, but it makes the game playable. It’s tough to describe the difference in feeling but on the ‘Switch the movements feel like there is some ‘friction’ to them which makes it easy to stay on a target that you’ve acquired. The PC mouse mapping feels more like the gyro is moving on ice–it moves a little quicker and doesn’t stop at a position as quickly.

Running on low graphics mode is interesting. You can see why Nintendo opted for a slightly more anime cartoon style with less detail for Breath of the Wild–you get what feels like full detail at all zoom levels whereas Horizon Zero Dawn is trying to force every leaf and cattail into pixels that are too large. The scenery is still beautiful, though it does act like an advertisement to buy more powerful hardware.

The physics of Horizon Zero Dawn are a bit “heavy”–like gravity is more powerful in the on-screen world than in reality. Your character just can’t turn on a dime like you want them to. Here, too, Nintendo made some good decisions with the physics tweaks for their games. While you’d never feel that Mario’s double jumps are possible IRL, Link is very light on his feet without feeling unnatural. You’d never be able to do what he does on screen but you still suspend disbelief and as a result, you enjoy the game more due to the responsiveness. With Horizon Zero Dawn you’re always accounting for character lag.

Again, with Breath of the Wild as a reference, the compressed map of Horizon Zero Dawn feels “small”. Lack of climbing without handholds makes it feel smaller. Still, it’s been a fun world to inhabit so far. It’s like Small Hyrule, with only Guardians.

The Nintendo Switch controller config is fantastic–you can even use the ‘screen shot’ button to take screen shots!

Here is how the game looks on “low” settings. I play this on a projector which only supports 720p so I didn’t bother trying to push the limits of my system. If you’re able to do better let me know in the comments!